Collective action is commonly understood as two or more people working cooperatively together towards a specific common goal. The role of collective action by indigenous peoples and local communities for biodiversity conservation was recognised in the decision on resource mobilisation at the 12th meeting of the Conference of the Parties (COP12). Bolivia proposed a framework (funded by SwedBio) for the conceptualisation and measurement of the contribution of collective action to biodiversity conservation and sustainable use for inclusion in the CBD Financial Reporting Framework.

In order to follow up on this decision and find diverse ways to carry it out, the “Dialogue Workshop on assessment of collective action in Biodiversity Conservation” was organised by SwedBio at Stockholm Resilience Centre and the Secretariat of the Convention on Biological Diversity (SCBD) together with local hosts in Guatemala, the National Council of Protected Areas (CONAP) and Asociación Sotz´il. The contribution of collective action and customary sustainable use by indigenous peoples and local communities to biodiversity conservation was also recognised in several other CBD decisions at COP12 such as on Article 8j on traditional knowledge, and Article 10c on customary sustainable use. 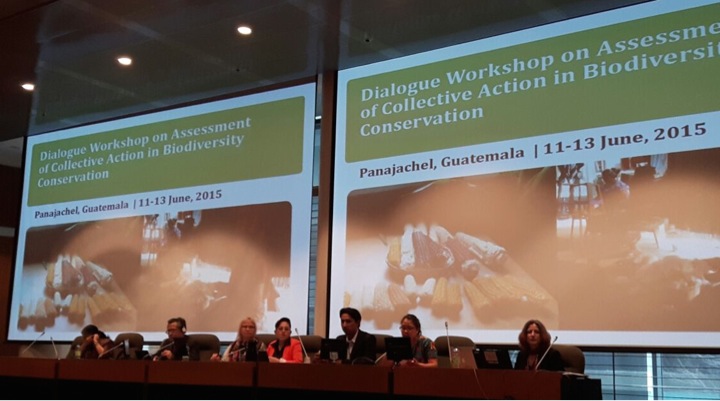 Reporting and indicators under Aichi Targets

At the side event, “Collective Action by Indigenous peoples and local communities – Reporting and Indicators under Aichi Targets including the financial reporting framework”, Juliana Upun, Sotzi´l, Guatemala, and Maria Schultz, SwedBio at Stockholm Resilience Centre, explained that the purpose and aim of the dialogue in Guatemala had been to visualise the values of collective action and describe possible ways of measuring and aggregating both quantitative as well as qualitative data.

The facilitators asked the audience to reflect for a few minutes on what collective action of indigenous and local communities is and how it can contribute to conservation and sustainable use of biodiversity. They shared some of the viewpoints from the Guatemala dialogue.

“From literature, we could summarise collective action to be ‘cooperation among two or more individuals to achieve outcomes that none of these individuals could achieve on their own; and to solve collective problems and choices at different levels,’” said Maria Schultz.

Outcomes of the Guatemala dialogue emphasise that the process of assessing, valuing and measuring the benefits of collective action and its contribution to biological diversity, must recognise multiple values. Whilst collective action might be reported in monetary terms, in most cases it would make a non-monetary contribution.

Many participants in the dialogue workshop further stressed that socio-cultural values cannot be measured adequately through monetary valuation, and that traditional knowledge can provide an important contribution on an equal level to scientific knowledge in decision-making and reporting processes.

José Luis Echevarria Tello, from CONAP, Guatemala described collective action from a Guatemalan perspective, where the coevolution of culture and biological elements of importance in the livelihoods of indigenous peoples and local communities have been apparent over time. This also means that knowledge transfer over generations is critical to governance systems and institutions, as well as in  promoting customary sustainable use, and to ensure the sharing of benefits from biodiversity resources with communities. This is now also being promoted in Guatemala’s effort to implement the CBD at the national level.

Evaluating the Contribution of Collective Action to Biodiversity Conservation

Sorka J. Copa Romero, Ministry of Foreign Affairs, Bolivia talked about the “Conceptual and Methodological Framework for Evaluating the Contribution of Collective Action to Biodiversity Conservation”, developed by the Government of Bolivia with the support of the Amazon Cooperation Treaty Organization (ACTO), and funded by SwedBio. The framework proposes a three-module approach, linking geospatial modelling, institutional analysis and ecological assessment.

Pernilla Malmer, SwedBio at Stockholm Resilience Centre, Sweden described how methods for monitoring collective action are advancing, through the Indigenous peoples’ and local communities’ own work, to develop monitoring systems. Community-Based Monitoring and Information Systems (CBMIS) are a bundle of methods, developed by local communities based on their own monitoring needs, which are used for monitoring the indicators for traditional knowledge under the Convention. The initial aim with this monitoring is to strengthen the local knowledge base for territorial resource management and community development, but it can also contribute case studies and data for Aichi targets and other international commitments. For example, eco-cultural mapping, the ICCA Consortiums toolboxes and the efforts made by the “10c network”, and the “Outlook on biodiversity”.

Indigenous peoples and local communities need to be fully involved in the process of developing and applying methodologies for assessing their collective actions, from the onset to its application. Pernilla  also presented the Multiple Evidence Base approach, as a method to ensure that indigenous peoples’ contributions are equally valid to scientific contributions in the process of working across the different streams of monitoring from different sources.

In the discussion that followed the presentations, it was reflected that traditional knowledge can provide an important contribution to decision-making and reporting processes. It was considered important for the ways and means of holding and transmitting traditional knowledge to be recognised and fully included when reporting on the contribution of collective action by indigenous peoples and local communities.

Robert Hoff from the SCBD, reflected that they have seen a positive development in contributions from indigenous peoples and local communities in developing their own indicators, in bottom up approaches. However, he said it was still difficult to follow up and aggregate these across communities. He reflected that although it might be difficult to identify global indicators for collective action,  there are many options to confirm their values locally. In some cases expert knowledge is lacking in national reports – Indigenous peoples and local communities might offer that expertise, as an input to the reports.

The CBD will follow up on guiding principles for reporting on collective action under the resource mobilisation framework in COP13.