Mobilization of indigenous knowledge contributes to strengthened governance of biocultural systems, and can support informed policy decisions related to biodiversity and ecosystem services. The organization PASD and the Karen community Hin Lad Nai in northern Thailand is part of the new network of "Indigenous and local knowledge Centres of Distinction”. Photo: Pernilla Malmer

Indigenous and local knowledge in IPBES & Traditional Knowledge in the CBD

Approaches and synergies for biodiversity and people

Knowledge that is embedded within indigenous and local communities contributes a wealth of insights about the governance and management of vast areas that are rich in biodiversity, all over the world. Ensuring contributions from diverse knowledge systems are included in ways that are legitimate, credible and useful for all actors is important for informed policy and decision-making. Both The Convention on Biological Diversity (CBD) and the Intergovernmental Platform on Biodiversity and Ecosystem Services (IPBES) are important arenas for enabling such “dialogue across knowledge systems”. The Multiple Evidence Base approach visualises how this can be put in practice in different processes and scales.

In May 2016, Swedbio and its partners co-hosted a side event during the Convention on Biological Diversity (CBD) in Montreal together with the Secretariat of the CBD and Forest Peoples Programme (FPP). Entitled, Indigenous and local knowledge in IPBES and Traditional Knowledge in the CBD – approaches and synergies for reaching Aichi Targets, the side event aimed at exchanging updates and reflections from the CBD and the IPBES about the inclusion of indigenous, traditional and local knowledge and customary sustainable use in their respective processes. The recent efforts of the IPBES to develop procedures and approaches to working with Indigenous and local knowledge in assessments was an important topic for discussion (read more about this work here).

The approach of the CBD, when it was agreed in 1992, broke new ground for understanding the importance of traditional knowledge related to biodiversity resources. Since IPBES was established over 20 years after the CBD, with the ambition of treating knowledge systems equally in its assessments, the insights about the value of indigenous and local knowledge have had increased attention. Within the CBD, the International Indigenous Forum on Biodiversity (IIFB) was formed in 1996, and serves as the caucus where all Indigenous peoples and local communities come together during CBD meetings. The process of building these institutions was useful when it came to setting up a similar caucus within the IPBES, the International Indigenous Forum on Biodiversity and Ecosystem Services (IIF BES). This is the group of IPLC participants present and gathering at IPBES Plenary meetings.

Assessments, capacity building and outreach activities continue in between IPBES meetings through ”Centres of Distinction on Indigenous and Local Knowledge”. This is a new initiative of indigenous peoples and local community organisations engaging in IPBES and other knowledge processes about biodiversity. Composed of organizations implementing programs on traditional knowledge all over the world, the Centres of Distinctions network aims to be a support mechanism for delivering inputs into IPBES by indigenous and local knowledge holders themselves. Polina Shulbaeva explained that her own network in Russia, CISPIN, Center for Support of Indigenous Peoples of the North, is made up of 14 IP organisations who collaborate closely with each other and exchange information and questions. 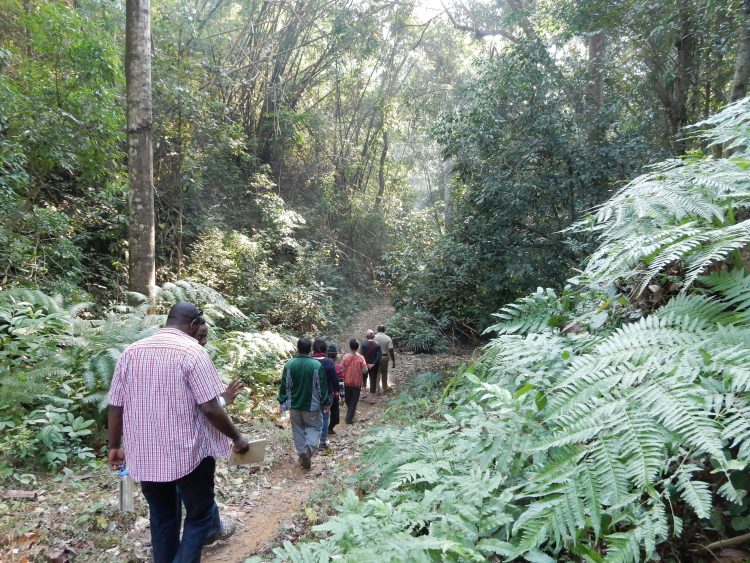 Exchange visit with walking workshop in the Hin Lad Nai community, with holders of knowledge from other ILK Centres of Distinction, from Kenya, Ethiopia and Philippines. Hin Lad Nai rotational farming and sustainable forest management has been recognized as an important cultural heritage and climate friendly practices. Photo: Pernilla Malmer

A Wapichan leader from Guyana who was in the audience, asked about instances where local communities do not want to provide their knowledge, or do not share particular knowledge. Alfred Oteng-Yeboah, Vice Chair of IPBES Bureau and member of IPBES ILK Task Force explained that IPBES does not want to access secret knowledge, nor force Indigenous Peoples to give or share their knowledge if they do not want to, but rather that it seeks their reflections on certain issues.

Mr Oteng-Yeboah remarked, “The recognition of ILK is happening at a time when a lot of ILK is getting lost. It is difficult to identify people to interact – the selection of experts is a big challenge. Another challenge is how to convey to ILK holders that don’t have to tell their secrets, but just share reflections.”

Methods for working across knowledge systems

Continuing with the theme of bridging knowledge systems, Mr Oteng-Yeboah gave an update from the IPBES experiences so far. He explained that IPBES is generally working with readily available information from scientific articles and similar sources. However, the indigenous and local knowledge that is practiced and continuously evolves, is not like that; there is no peer review to start from. IPBES has the challenge of finding out how best to interact with holders of knowledge in going ahead with the IPBES assessments.

Recently, a key set of “Procedures for working with indigenous and local knowledge systems” was approved at IPBES 4.

ILK dialogue has been piloted in the assessment of pollinators, pollination and food production, followed by the regional IPBES assessments. These dialogues are opportunities for holders of indigenous and local knowledge to work together with scientists, to understand one another and, to contribute to the work of IPBES.

A fully integrated way of working across knowledge systems

Viviana Figueroa, Associate Programme Officer for traditional knowledge of the SCBD and member of the IPBES ILK Task Force, elaborated on the principles of working with ILK in the IPBES, and TK in the CBD, emphasising the general need for inclusive procedures and methods of engaging with holders of knowledge in the CBD as well as IPBES. In all processes, a central point for IPLCs goes back to how the rights to their knowledge, biodiversity and territories can be protected.

Viviana also explained how the participatory mechanism of CBD for IPLCs works. It has mainly been established through the working group on traditional knowledge, article 8(j). The WG8(j) includes enhanced participation mechanisms for IPLCs such as :

Pernilla Malmer from SwedBio presented a scoping study of Indigenous and local knowledge for a Nordic sub-regional assessment. The scoping applied the proposed procedures for ILK in IPBES. Sweden, Norway, Finland, Denmark, Iceland, plus a number of autonomous areas, Foroyar (Faroe Islands), Åland Kalaallit Nunaat Greenland, Sapmi took part. Although initially participants had trouble seeing the relevance of IPBES to themselves, in the end they reported finding it fruitful to share between countries and cultures. Pernilla stressed that, “The goal will always be to make these processes of knowledge sharing meaningful and useful for the ILK holders and scientific partners alike.”

Some feedback from the audience commented on the gap at the bottom between the network of ILK / TK Centres of Distinction and the networks of local scientists. A connection at the horizontal level, with local and national systems, and recognition not only at high or international levels but at all levels, was suggested.

One of the big issues, stressed by the representatives of the Centres of Distinction, is the availability of resources – although the respect, recognition and willingness to bring in ILK and TK is getting more attention, and there are calls for ILK in many processes, including the SDGs, the networks of Indigenous peoples and local communities are not well financed or strong enough. In particular, their customary sustainable use and practices, and their rights to resources, which are the base for maintaining their knowledge, also need to be protected and supported.

The Multiple Evidence Based approach

A report outlines the events and outcomes of a walking workshop in Hin Lad Nai, northern Thailand. There, the Karen community hosted representatives from the Philippines, Kenya, Ethiopia and Panama and discussed methods and outcomes of their community research initiatives....  Read more »