The role of multi actor dialogues in key negotiation processes

A case study from the Quito dialogues

Earth’s biological resources and their diversity are vital to the well-being of humanity and economic and social development everywhere. Yet, biodiversity is being lost across the planet at alarming rates. Recognising the critical importance of biodiversity, a set of targets – the Aichi Biodiversity Targets – were agreed at the tenth conference of the parties (COP 10) of the Convention on Biological Diversity (CBD). These targets aim to halt the loss of biodiversity to ensure that by 2020 ecosystems are resilient and continue to provide essential services, thereby securing the planet’s variety of life, and contributing to human well-being and poverty eradication.

Both public funding in the form of ODA and innovative finance mechanisms such as tax reforms and eliminating harmful subsidies, payment for ecosystem services, biodiversity offsets and green markets have been put forward as part of the strategy to increase resources for implementing the Aichi Targets.

However, at COP10 in 2010 – in the very last hours of the meeting – for the first time in the history of CBD a whole decision was deleted. Parties could not reach agreement on the issues around innovative financial mechanisms and the decision had to be dropped to enable agreement on the other decisions. Parties considered that the institutional frameworks, regulations of markets and safeguards were not developed enough; while on the other hand a lack of trust and an absence of dialogue between actors with different political views prevailed.

The Quito I Dialogue

An agreement was made in these last hours of COP10 by SwedBio that offered to initiate a dialogue seminar as a possible way to move out of the deadlock and Norad offered to deliver a science-based background report to the meeting. A dialogue seminar was then held in Quito, Ecuador, in March 2012, convened by the governments of Sweden, Ecuador, Norway, India and Japan, together with the CBD Secretariat, and organised by SwedBio with the help of IUCN-Sur. Its objective was not to draft formal recommendations but to explore and contribute to the understanding of convergence and divergence of views in scaling up the mobilization of financial resources, and to prepare for the up-coming negotiations at COP 11 in Hyderabad, India.

”The dialogue took nearly a year and a half to plan and creating the aim and agenda was a participative process. Right from the start, the aim of the dialogues was to listen to each other, to understand one another, to meet in a respectful way ” says Maria Schultz, the Swedish co-chair of the dialogue and director of SwedBio

An atmosphere of trust

An informal and pleasant environment supported the intentions of the workshop by mixing presentations with opportunities for discussions in smaller groups. There was time for participants to get to know each other and to meet in more casual settings; for example, a long bus ride during a fieldtrip allowed plenty of time for in-depth, bi-lateral discussions.

As a result of better dialogue and mutual trust, several areas of convergence emerged including the need for country-specific financing mechanisms and policies, safeguards and appropriate governance structures to avoid unintended outcomes. Fiscal reforms, particularly green tax reforms and removal of perverse subsidies, were considered promising, as were green markets.

A regional follow up to the Quito I Seminar was conducted in Bolivia and South America in 2012. The report from this seminar became an Information document for COP11.

The meeting became an official information document to the CBD negotiations, and the outcomes were presented from the podium during at the start of the next negotiation meeting in order to set a good atmosphere in the meeting. Furthermore, the Quito dialogue was referred to in the negotiation texts and, at COP 11 several negotiators said that the most important feature of it, apart from the rich understanding of opportunities and challenges posed by different financial mechanisms, was the convivial atmosphere and the renewed trust in the negotiations. 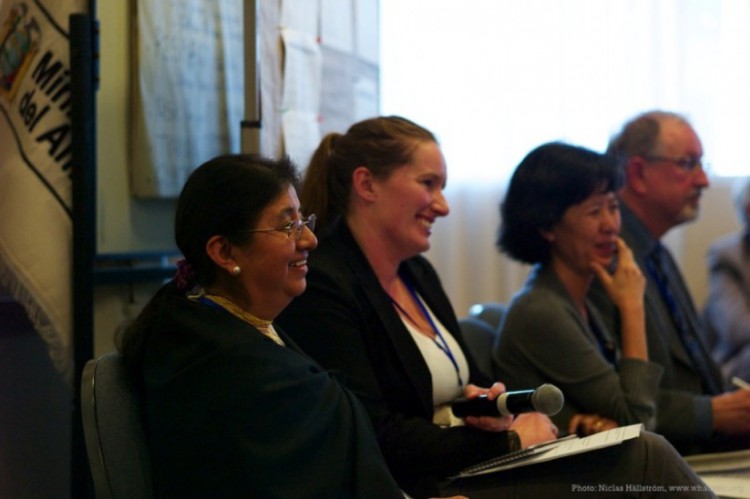 Yolanda Teran from the International Indigenous Forum on Biodiversity, Valerie Hickey from the World Bank, Chee Yoke Ling from Third World Network, and Arild Vatn, Professor at the Norwegian University of Life Sciences in panel discussion on Principles and experiences of financing for biodiversity and the importance of governance at Quito I. Photo: N. Hällström

Following the success of the 2012 Quito dialogue, SwedBio was asked to co-organise a second dialogue, as part of the preparations for the 12th Conference of the parties to the Convention on Biological Diversity (COP12).

The Quito II Dialogue, “Scaling up biodiversity finance – with a focus on the value of biodiversity for policy choices, mainstreaming and funding” was held in April 2014. Once again the host was IUCN-Sur in Quito. The governments of Ecuador, India, Japan, Republic of Korea, Norway, Sweden, Uganda, the European Commission and the Secretariat of the Convention on Biological Diversity (CBD) convened the meeting.

Nearly 90 participants attended the dialogue and included the same range and diversity of representatives as for Quito I. The seminar had similar aims as Quito I but there was a stronger focus on safeguards and also values of biodiversity. The seminar covered Mainstreaming biodiversity; Overview of financing mechanisms; Governance, safeguards and equity; Incentives and options for financing such as Payment for Ecosystem Services (PES), compensation schemes, subsidies, and Biodiversity Offsets; private and financial sector; fiscal reforms and international levies; and synergies for biodiversity financing, in terms of climate change, Sustainable Development Goals, and Overseas Development Assistance.

It was acknowledged that valuation of biodiversity can be done using a number of methods, from dialogues with relevant actors who communicate and demonstrate qualitative values – to valuation in quantitative and economic terms. It was also discussed that the term ‘innovative finance mechanisms’ (IFMs) is misleading since very few of the mechanisms are in fact innovative. Other terms were suggested, such as biodiversity finance mechanisms (BFMs) or environment policy/economic instruments. The importance of safeguards for any mechanism was discussed, partly elaborating on the safeguards paper that resulted from needs expressed in the first Quito meeting and later negotiations under CBD.

The co-chairs’ report was available on the Internet, both on the CBD website and on the SRC website and available in both Spanish and English. Once again, it became an official information document to the CBD negotiations. Side-events at the negotiation meetings were arranged, and the Quito II dialogue was referred to in the negotiation text.

Furthermore, voluntary guidelines for safeguards were adopted, based on a report developed by SwedBio/SRC that resulted from the Quito processes.

”Safeguards in Biodiversity Financing Mechanisms (BFMs) – measures for maximising the protection of biodiversity and people’s livelihoods, including local communities and indigenous peoples – can contribute to mainstream biodiversity and equitable governance across international and national institutions.” said Claudia Ituarte-Lima from Stockholm Resilience Centre and one of the authors of the report.

In addition, a work related to the value and assessment of the collective action of indigenous peoples and local communities was initiated through the Quito processes.

Dr. Braulio Dias, the Executive Secretary of CBD, concluded the Quito II seminar by saying that the two Quito seminars brought to light a wealth of ideas. He said that we need to go beyond decisions to implementation, and that it is important to understand what mechanisms and measures could facilitate governments in their implementation, and concluded that future CBD meetings would be arranged to include dialogues between negotiators to facilitate effective outcomes.

Views from evaluation questionnaire of Quito I:

“The conclusions, results and opinions of the seminar have been used at the COP 11 and other negotiation spaces. The concepts and the different discussions have generated new global visions for innovative mechanisms.” Participant from Ecuador

“The workshop was an eye opener and brought out important issues as presented by the various experts that enhanced participants’ knowledge.” Participant from Zambia

“The most important effect of the seminar was that it created trust, after the seminar it was much easier with dialogue between negotiators with different views.” Participant from Costa Rica

Examples of reflections and topics discussed at the Quito I and Quito II dialogues:

More on the Quito Dialogues