Home / Videos / Photos as a starting point for conversations﻿

Photos as a starting point for conversations﻿

Eight participant photographers, six of whom were women, volunteered to take photographs each week between November and December 2017. They used disposable cameras and, for most, it was the first time they were taking pictures. In February 2018, ICLEI Africa, SwedBio and OWI met the photographers at Lizulu market to talk about the project, using the photographs as a starting point for conversations.

Overall, the participants expressed enthusiasm about the project and said they enjoyed being photographers. Going to the same place every week also helped them to notice changes and reflect on their ability to contribute to better waste management:

“We need to have hope, courage and unity. Working together towards the same goal, working as a team. It’s good to encourage each other and set goals and focus on them together.” Memory Mathews, Lizulu market photovoice photographer

Despite language differences and the need for translation between English and Chichewa, the conversations based on the photos were emotive and led to further comments from the photographers about their feelings and concern for the water quality, ecology and safety for the citizens of Lilongwe, as well as some comments about the river symbolizing life.

Insights from the photovoice activity were also captured in a video reporting first-hand the voices of the different actors involved. 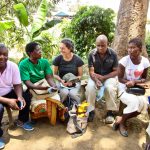 About – The Tebtebba Foundation

Why do Human Rights matter to the Convention on Biological Diversity (CBD)?

About – The Forest Peoples Programme

Redesigning a riverside site in Addis Ababa, one block at a time

Thomas Elmqvist on the report Nature in the Urban Century

What is an Inclusive Green Economy?

SwedBio has a new Director

How can barriers to adopt sustainable agriculture be overcome?

Rich biodiversity CAN exist in and around cities

Looking back at COP11 in India